THE Graft is a natural, porous bone mineral matrix produced by removal of all organic components from porcine cancellous bone. Due to its natural structure, the anorganic bone mineral of THE Graft TM mimics the physical and chemical aspects of mineralized matrix of human bone. When packed into a bone defect, THE Graft TM gradually resorbs and is replaced with new bone during the healing process.

This item is currently not in stock
More InformationQuestions and AnswersVideosReviews

THE Graft TM is designed to mimic the structure of human bone, offering osteoconductive properties to host cell growth and complete remodeling to host bone. The natural structure of the anorganic bone mineral of THE Graft demonstrates similar physical and chemical characteristics compared to the mineralized matrix of human bone. THE Graft  gradually resorbs and is replaced with host bone during the healing process. THE Graft  is cancellous granules and is sterilized using gamma irradiation.

Considering that both bovine bone grafting materials have been successfully used in oral surgery applications in the last few decades, this work shows that the porcine-derived grafting material possesses most of the key physiochemical characteristics required for its application as a highly efficient xenograft material for bone replacement.


The results suggested that DPBM might produce comparable bone formation and volumetric stability with DBBM in maxillary sinus grafting, however, further clinical study with longer‐term periods and larger sample sizes should be needed for confirming this suggestion.

Case 1 Extraction Socket
A 70-year old male patient, who presented to the dental clinic for implant placement to replace tooth #36, which was extracted due to severe pain and mobility. A ridge preservation was carried out using The Graft, and a doubled layered collagen membrane, which would compensate for the loss of buccal bone. An adequate healing of the defected bone was seen after 5 months upon placement of the implant on #36. Biopsy was taken from the tissue around the implant using a trephine bur and the result revealed new bone formation around the bone graft material.

A 65-year old female patient who had an abscess and discomfort on chewing associated with tooth #46, presented to the clinic for implant placement. #46 was extracted and a plug was applied, for rapid healing of soft tissue, followed by suture placment. The Graft was used a bone graft material without using a membrane. Upon re-entry surgery, adequate volume of newly formed bone was seen that could sufficiently support the implant on the buccal aspect. 3-year post-operative CT Scan revelaed a complete replacement of defected bony lesion into compact and cancellous bone due to grafting with The Graft.

Why is porosity important for a grafting material?
Porosity is an important factor in determining tissue-implant material integration. High porosity leads to a quicker absorption of liquids and cells spreading. THE Graft™ provides the optimized bone architecture for cells adhesions and tissue regeneration. \> The porosity of THE Graft was found to be 78.4%, which is larger than that of both Bio-Oss® and Cerabone®. Considering the comparable porosity of human trabecular bone (79.3%), this result suggests that THE Graft resembles the porous structure of human bone quite closely. 1 \*\*Porosity Chart\*\*

\*\*Wetting mass of the graft materials as a function of time.\*\* 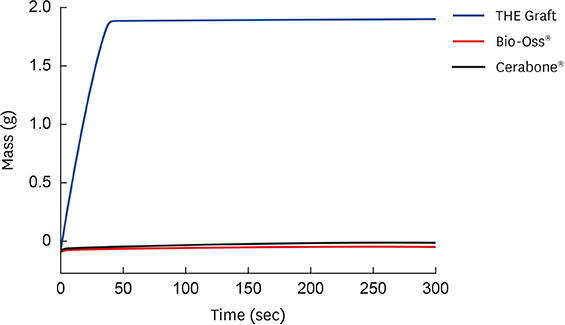 J Periodontal Implant Sci. 2017 Dec;47(6):388-401. https://doi.org/10.5051/jpis.2017.47.6.388   Copyright © 2017. Korean Academy of Periodontology
Is The Graft Safe?
Yes. The Graft is processed using proprietary virus inactivation process technology. Thanks to highly efficient manufacturing process, THE Graft™ is free from any organic components that might be potential causes of infection or immune reaction. This unique process preserves most of the physical properties of the native porcine osseous structure of THE Graft™.
How does The Graft compare to Bio-Oss and other xenografts?
Bio-Oss ® is a product from Geistlich that is bone substitute sourced from bovine. It is known as a DBBM or deproteinized bovine bone material. The GRAFT, on the other hand, is a DPBM, or a deproteinized porcine bone material.  There have been several studies that compared bovine (i.e. Bio-Oss), and porcine (i.e. The GRAFT) bone substitutes. Overall the studies show that both types of graft are equally viable materials. "Considering that both bovine bone grafting materials have been successfully used in oral surgery applications in the last few decades, this work shows that the porcine-derived grafting material possesses most of the key physiochemical characteristics required for its application as a highly efficient xenograft material for bone replacement." 1,2  The benefit of a porcine-derived bone substitute, like The Graft ® vs a bovine-derived substitute (Bio-Oss), is that studies have shown that the porcine bone has a higher Hydrophilicity and Porosity than comparable bovine bone. These properties suggest advantages of porcine bone as a grafting material. Numerous studies have shown that attachment, growth, and proliferation of various types of cells, including osteoblasts, have been reported to be significantly affected by the "wettability" of the material surface.
Is the The Graft cleared by the FDA?
Yes. The Graft received a 510-K Class 2 clearance by the FDA in June 2018. You can download the \[FDA notification here]\(https://www.accessdata.fda.gov/cdrh\_docs/pdf17/K173188.pdf). \*\*References\*\* 1\. J Periodontal Implant Sci. 2017 Dec;47(6):388-401. \[Physicochemical characterization of porcine bone-derived grafting material and comparison with bovine xenografts for dental applications.]\(https://www.jpis.org/search.php?where=aview&id=10.5051/jpis.2017.47.6.388&code=1150JPIS&vmode=FULL) 2\. Clin Implant Dent Relat Res 2018 Jul 27. Epub 2018 Jul 27. \[Alveolar ridge regeneration of damaged extraction sockets using deproteinized porcine versus bovine bone minerals: A randomized clinical trial. 100 patients]\(https://onlinelibrary.wiley.com/doi/full/10.1111/cid.12628)
What is the source of The Graft?
\[The Graft Bone Substitute]\(https://www.ddsgadget.com/the-graft-bone-substitute.html) is a natural and porous bone mineral matrix available in cancellous granules. It is manufactured by removal of most organic components from porcine bone.

Sorry, we don't have any videos yet for this product. In the meantime, enjoy 2 of FREE CE Previews. Customers can now earn FREE CE.